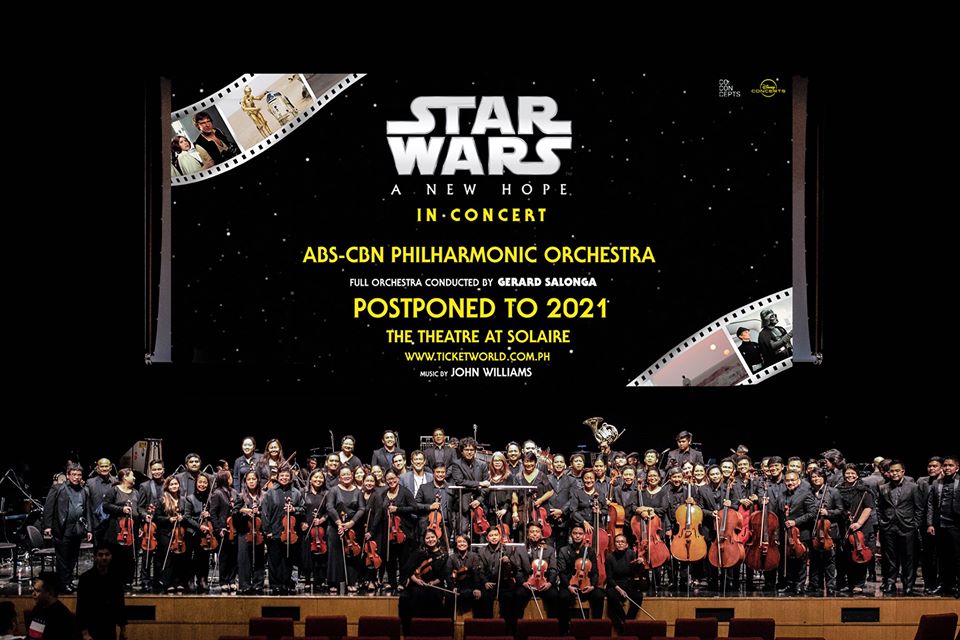 CC:Concepts will present the Star Wars: A New Hope In Concert featuring screenings of the complete film with Oscar®-winning composer John Williams’ musical score performed live to the film. The concert will be led by acclaimed conductor Gerard Salonga.

Since the release of the first Star Wars movie over 40 years ago, the Star Wars saga has had a seismic impact on both cinema and culture, inspiring audiences around the world with its mythic storytelling, captivating characters, groundbreaking special effects and iconic musical scores composed by Williams.

Fans will be able to experience the scope and grandeur of this beloved film in a live symphonic concert experience, when the Star Wars: A New Hope debuts on August 15-16, 2020.

All seats are on a reservation basis through TicketWorld Manila | Ticket selling will start on February 28, 2020: https://bit.ly/2udHEEW

Performances are recommended for children 7 years old and above. All guests entering the theatre, regardless of age, must have a ticket. The Theatre at Solaire rules and regulations also apply, including a venue age restriction for children aged 2 years and below.

Theatre Foyers open 2 hours before every performance, and the theatre doors open 30 minutes prior. Latecomers will not be admitted until a suitable break in the performance.

The Theatre at Solaire

Venue: The Theatre At Solaire

Established in 2016, CC:Concepts is an entertainment and events company aiming to help build the arts and cultural landscape in the Philippines through music. By showcasing diversity and building a community, the collective hopes to expand the perspective on what music events have to offer.

Their events range from dance music experiences under the UNKNWN brand with notable guests like Jamie xx, Breakbot, Four Tet, Hunee and Crazy P — to live music shows featuring Jaden Smith and A$AP Ferg — and film concerts with live orchestras of the Harry Potter Film Concert Series, Star Wars: Film Concert Series and Call Me By Your Name. To date, 70+ ticketed events have been produced.