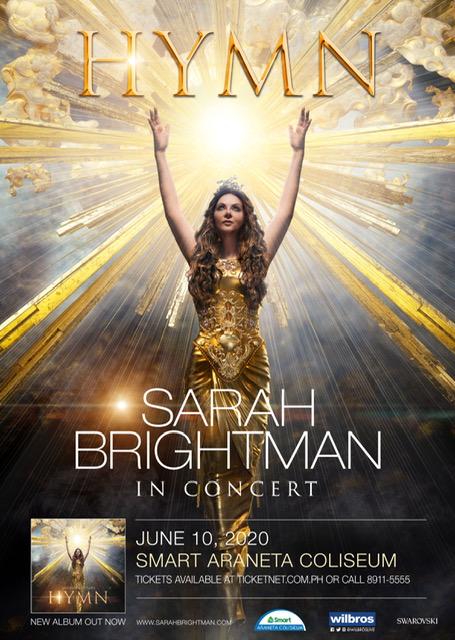 Of the tour, Brightman says fans should "expect the unexpected!" HYMN in Concert – World Tour has toured five continents throughout 2018 and 2019 with over 125 shows. To enhance her world of enchantment, Sarah Brightman has partnered with Swarovski on her world tour. Her elaborate costumes and dazzling tiaras will be composed of Swarovski crystals.

"I'm so excited to share this album with everyone. HYMN is excitingly eclectic, encompassing many different styles, and I'm looking forward to performing the new songs on my world tour. Every project I've done has come from an emotional place, and I wanted to make something that sounded very beautiful and uplifting.  To me, 'hymn,' suggests joy — a feeling of hope and light, something that is familiar and secure, and I hope that sentiment resonates through the music," said Sarah Brightman.

Known for her three-octave range and for pioneering the classical-crossover music movement, Sarah Brightman has amassed global sales of more than 30 million units. The only artist to have simultaneously topped Billboard's dance and classical music charts, Brightman has racked up more than 180 gold and platinum awards in over 40 countries. She is also known for her iconic star turn in The Phantom of the Opera, whose soundtrack has sold more than 40 million copies worldwide. Her duet with Bocelli, "Time To Say Goodbye," became an international success selling 12 million copies worldwide. Brightman's albums Eden, La Luna, Harem, and Symphony were each chart-topping Billboard hits and accompanied by world tours. Additionally, Brightman has performed at such prestigious events as the 2007 Concert for Diana, the 1992 Barcelona Olympic Games and the 2008 Beijing Olympic Games.

Tickets to Sarah Brightman – HYMN in Concert – World Tour 2020 in Manila goes on-sale on Saturday, February 1 at 10AM via TicketNet.com.ph, TicketNet outlets nationwide or Call 8911-5555 for more information.