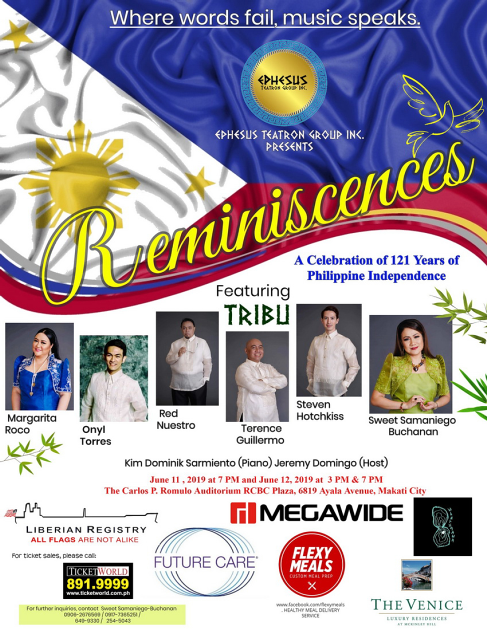 Ephesus Teatron Group Inc. proudly presents “ REMINISCENCES " - A celebration of 121 Years of Philippine Independence featuring TRIBU. The tribute concert will be held on June 11 (Tuesday)  at 7 p.m. and on June 12 (Wednesday) at 3 pm and 7 pm at the Carlos P. Romulo Auditorium,  RCBC Plaza, Makati City.

REMINISCENCES will feature a repertoire of unforgettable patriotic songs of freedom, love and inspiration to commemorate the 121st Anniversary of Philippine Independence.

Songs like Bayan Ko (My Country), the intensely patriotic Sa Mahal Kong Bayan (To My Beloved Country) by Lucio San Pedro, and to with even more patriotic fervor Pilipinas Kong Mahal (My Beloved Philippines) by Francisco Santiago, among many other songs that depict Filipino heroism, will relive the music and celebrate the heroes and brave people who made this country possible and those who defend our way of life.

“Alerta, Katipunan!” was one of the songs of the revolution. It was the march used by the Kataas-taasang Kagalang-galangang Katipunan ng mga Anak ng Bayan (KKK). The piece was originally a Spanish march, and then was adopted by the Katipunan.

Canto de Maria Clara (The Song of Maria Clara) is from one of the chapters of Rizal's novel, Noli Me Tangere. It is a poem that depicts his feelings for his motherland and his premonition of the coming doom.

Pag-ibig sa Tinubuan Lupa, a poem written by Andres Bonifacio, is an exhortation to the Filipino people to join the crusade for Philippine independence.

All of the songs are musically arranged by Pipo Cifra and Sweet Buchanan.

Join us in this celebration to feel what it means to be a Filipino and walk away with a sense of pride for our country.