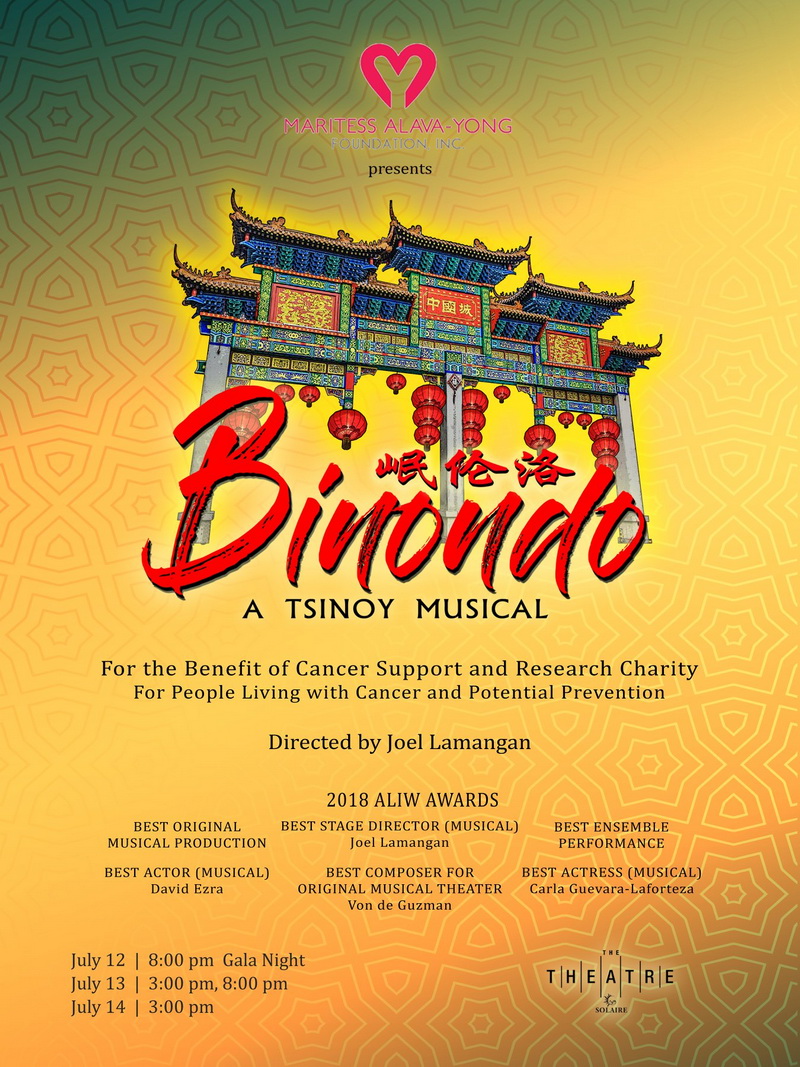 Maritess Alava Yong Foundation proudly presents the re-staging of BINONDO, A TSINOY MUSICAL to be directed by Joel Lamangan, from the original story by Rebecca Chuaunsu and written by Ricky Lee with Gershom Chua, Eljay Deldoc and music by Von de Guzman.

The times were changing. Political unrest enveloped the Philippines. The Cultural Revolution was in full swing in China. But in Manila's Chinatown during the 1971 Mid Autumn Festival and under one of the brightest moons ever recorded in history, LILY, a Filipina night club singer and Ah Tiong, a mainland Chinese scholar, meet at the birthday celebration of the Chinese Love Deity Ge Lao. Lily, a hopeless romantic and Ah Tiong, a cynic about love and destiny, embark on a journey of love that defies all expectations.

But Lily's local Chinese childhood friend Carlos who has long harbored hidden feelings for her will not make things easy for the star-crossed lovers as all three are forced to discover the different ways of giving and receiving love.

Spanning two decades and two countries, Binondo, A Tsinoy Musical explores how love prevails even in times of racial prejudice, political turmoil, absence and longing. This is a story of a deep and enduring love that transforms the lives of everyone who dares to put their hearts on the line.

Shiela Valderrama-Martinez shall reprise the role of Lily, a hopeless romantic; a Filipina who grew up in Chinatown. Unable to finish her college education, Lily is forced to work odd jobs, from a worker in a Chinese factory to a singer at the famous Lotus Club in Binondo. She faithfully visits Ge Lao's altar (the Chinese God of marriage and love) in the hope to find her one true love.

Arman Ferrer reprises the role of Ah Tiong, a Mainland Chinese scholar from Beijing University who has earned a PhD in the United States of America. Ah Tiong is pragmatic and does not believe in a great love or destiny and is convinced that love is a duty that must be fulfilled. He has long accepted that his parents have arranged his future marriage. Before returning to the US for his masters' degree, Ah Tiong takes a side trip to the Philippines.

Noel Rayos plays the role of Carlos, a local Chinese man whose parents own the factory where Lily and her parents are employed. Carlos grows up with Lily and they become close friends. In college, he becomes an activist and brings Lily to protests and rallies. Carlos also helps Lily get into the Lotus Club, which is owned by a family friend.