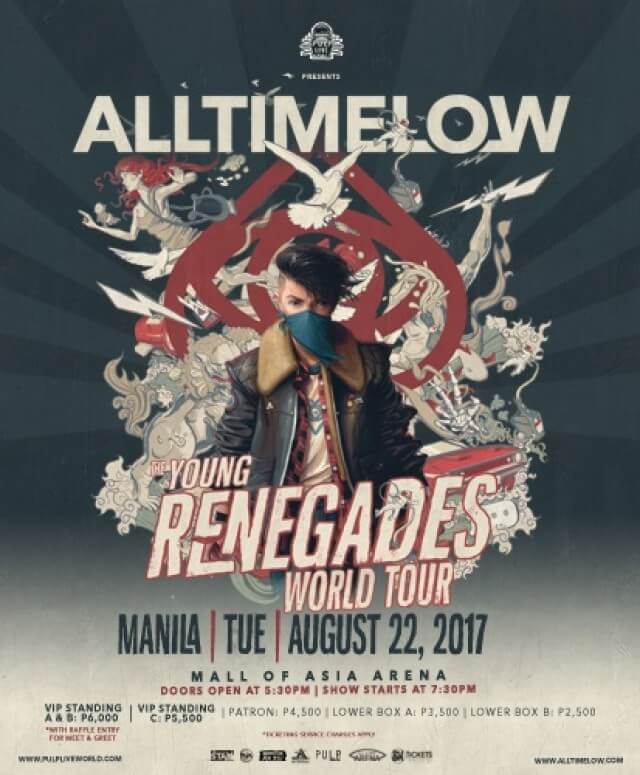 With the memory of a spectacular sold-out show back in 2015 still quite fresh in our minds, ALL TIME LOW will be coming back yet again to set everyone’s hearts on fire! PULP LIVE WORLD proudly announces ALL TIME LOW: THE YOUNG RENEGADES WORLD TOUR, scheduled to take place on August 22, 2017 at the Mall of Asia Arena.

Alex Gaskarth, Jack Barakat, Rian Dawson, and Zack Merrick are now on a whole different league as some of the scene’s biggest pop punk heroes, having delivered anthem after anthem through six stellar studio albums. Through the years, from their breakthrough single “Dear Maria, Count Me In” to their upcoming seventh album’s title-track “Last Young Renegade”, the four-piece band from Baltimore, Maryland has evolved in the scene from yesterday’s teenage pop punk up-and-comers to today’s trailblazers—from yesterday’s unsuspecting rookies to today’s unrelenting renegades.

All Time Low first played in the Philippines at the Araneta Coliseum during the Dirty Work era back in 2011, more notably making a headlining appearance at PULP’s BAZOOKA ROCKS FESTIVAL II in 2013 in support of their 2012 groundbreaking effort Don’t Panic. The Bazooka Rocks alumni then played in a packed Mall of Asia Arena on August 12, 2015 in support of their most recent release Future Hearts with The Maine as support act—a sold-out show powered by PULP LIVE WORLD.

“I tried to change perspective in my approach to writing and center in on all of the different versions of me that other people might have met over the years, through the ups and the downs, in the public eye and behind closed doors. Would I like this person? Do I like this person? Do I even recognize this person anymore?”, mused All Time Low frontman Alex Gaskarth upon sharing the news of their upcoming album Last Young Renegade, slated for release this coming June 2, 2017 under their new label Fueled By Ramen.

Fresh from the success of their 2015 album Future Hearts, All Time Low are introducing the Last Young Renegade as the persona and the name that represents the upcoming record’s “story of self-realization.” With the expectation of new tunes, it is with great excitement that PH Hustlers can anticipate the band’s return.

For more show information and upcoming announcements, you may visit www.pulpliveworld.com or keep your eyes glued to our PULP LIVE WORLD social media accounts on Facebook, Twitter, and Instagram.